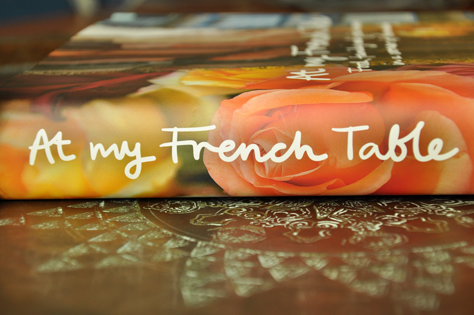 I discovered Jane’s cook book while staying at her Chateau in Normandy…  Absolutely de-lish, every recipe, but my favorite is the Normandy Apple Cake page 238.  Bon Appétit  C*

Thanks to Judy MacMahon at My French Life for the interview –

Jane Webster runs a unique culinary experience called ‘The French Table’ at Château de Bosgouet in Normandy. Groups of up to twelve people spend a week learning about French food and wine from world class chefs. Jane was born and raised in Australia, but now splits her time between her mother country and France.

She describes herself as ‘a very devoted family person, who lives an usual life in terms of living in two countries and loving parts of both places as much as the other.’

Jane has detailed the experiences of organising cooking classes, meals and other activities, as well as restoring the Château de Bosgouet in a book titled At My French Table. The book also includes seasonal recipes, including some of her originals, and hundreds of beautiful photographs.

Jane how did you become connected to all things French?

When we were engaged, Pete and I talked about where we would go on our honeymoon. And I don’t know why, but he was saying, “Let’s go to Hong Kong,” and I said, “No, Paris.” We’d never travelled before. Both of us were complete ‘travel virgins’’. We’d gone straight from school to university to work. I had to take some time off school (I was a teacher at PLC (Presbyterian Ladies’ College) at the time), because we figured we needed a month or six weeks to make it worthwhile. So I asked the principal, and he said, “Absolutely not. Teachers get enough time off. Get married at Christmas time.”

To which I replied, “But it’ll be winter over there then and we want to go in September.”

And Pete said, “Well, you’re always saying you’re bored. Your little class of twelve little girls [who are] just so perfect, so good, so well behaved…”

[It was true,] it was boring the hell out of me! I had gone straight from college to The King David School in Armadale, a progressive Jewish day school. I was the first gentile to ever teach at the school, and I started as the Director of Music. So it was really challenging and I had to learn Hebrew. I had to learn to roll my tongue and make those really guttural sounds that the children needed to sing the music in a choir.

Then I got my dream job at PLC. I was studying full-time at night, doing my Masters, but I was only 25 and I knew there was no chance of getting a promotion at that age.

And he said, “Do whatever you like. You’ve got lots of ideas. Why don’t you do one of them?”

And so that was when we decided that we would go to Paris for our honeymoon. When we got there, we fell madly in love with the city. My sister had got engaged to a Belgian man two weeks earlier and they lived in Paris eleven years. And that became our connection; we had an excuse to go to Paris every year.

And I’d learnt French for five years [at school], but I had no idea how to put it together when I got there! We were taught a lot of vocabulary (but not much else).

I see French as a life-long journey. Pete and I always say that the pivotal point [in their language ability] was when we left a dinner party two summers ago, neither of us needed to take a Panadol when we got home, [which we usually needed] because of the intense concentration. It is exhausting and frustrating.

When did you decide you wanted to move to France?

That really came with the Internet. One night, I remember, unplugging the phone and plugging in the Internet. I said to Pete, “Look at some of these French real estate sites.” I was staying up until 4 in the morning, drooling!

Pete said to me, “Why don’t you print some of them off and organise some rendez-vous with the real estate agents. We can see the houses and make it part of our holiday.”

At this stage, it was only a dream. The very first one we looked at, we were completely hooked. We looked at about 40 houses [because] we were there for a whole term.

The houses were scattered all over France. And because it takes a long time, about three hours, to expect a château, we had this sign for one another to say if it was worth staying and seeing the rest of it. Our code was Pete asking me, “Are you baking cookies?”

And I’d reply, “Yes, we’ll bake some this afternoon,” if I thought it was worth staying.

So the first time we saw Château de Bosgouet and we walked in, and we were in the reception level, it was a shocking mess because it had not been lived in for ten years. He said, “Are you baking cookies?”

So, it was at that point when it became quite serious. Actually, we had become quite serious about another property and signed for it. But then 9-11 happened. They let us out of the contract, because they said people were getting cold feet all over France.

We didn’t talk about it for ten months, but then one night we started again. It was another three years before we moved.

How did you decide to move?

I was tired of talking about it. Every night, we were walking the same route, and we’d end up talking about France. Finally, I just said, “We’re either doing it or we’re not”.

We thought constantly talking about moving to France must have been boring our friends and it was very distracting for the kids.

Finally, I said, “I think we will wake up one morning, and we’ll be 75 and we’ll say, ‘Why the hell didn’t we do that?’ The kids are all grown up, and they’re probably in the same place they would’ve been regardless, but we didn’t do it, why?”

We just thought to hell with it. We were both working from home, so all we needed was a laptop.

What do you think gets in the way of the ‘French Dream’ for other people?

Life. Mortgages, jobs, responsibilities, aging parents, all those things get in the way. My Mum had been quite ill before we left, and when we talked with them about maybe coming with us for two years Mum said, “Oh, I’d love to do that.” And I thought, ‘Gee that was easy.’

When the containers came, she put all her important stuff in the containers, but looking back I think it was a con, and my Dad thinks so too. She pushed me to do it, because she knew that I wouldn’t go without that push.

We left in the August, and she said they would come in March, when it was a bit warmer. But you know she was a trickster. I realised six or seven months in, it just wouldn’t happen.

To order of learn more about At My French Table: http://www.thefrenchtable.com.au/chateau.html