Truffles and sex go together like Maria Callas and opera — and the good news is it’s a splendid year for the voluptuous white truffles of Alba, Italy. 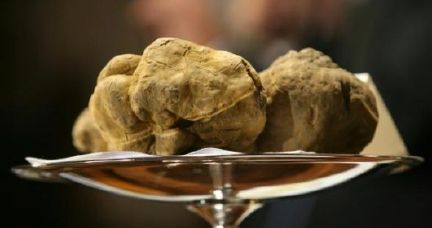 If someone asks you: “Do you know tuber magnatum pico?”, maybe your reply would not be immediate, but you would probably know for sure the one called white truffle. It is actually the same product: it is the most valuable truffle type, both from a gastronomic and a purely economic point of view. In fact, because of the very high cost, it is considered as a precious diamond.

Surely among the most popular ones is the white truffle of Alba (CN), a town located in the province of Cuneo in Piedmont region, which holds the record for the oldest White Truffle Fair which takes place between October and November.

A fair full of events, involving citizens and tourists, which reaches its climax on November 13th with the Worldwide Auction Sale of the White Truffles of Alba, which takes place precisely in the Hall of Masks in the Castle of Grinzane. Thanks to a satellite connection other cities around the world (in the past years cities such as Paris, Hong Kong, Moscow, Las Vegas, London, Munich in Bavaria, Tokyo, New York, Los Angeles and Hollywood also took part in the event) attend the live auction.

Since its beginning, the event has been conceived as an unmissable international event and over the years has been characterised by the participation of many VIPs, from athletes such as Joe di Maggio to film directors as Alfred Hitchcock, and from King Farouk to actors such as Ugo Tognazzi, Alain Delon, Gerard Depardieu and many others.
This can be considered a world-record holder auction, as for instance in the 2010 edition 13 truffles have been purchased for a total of 307,200 euros, and it is specifically aimed at increasing awareness of the white truffle of Alba at a national and international level. The two most valuable ones have been sold one in Hong Kong for 105,000 euros and the other one in Grinzane for 100,000 euros. Hong Kong won at auction the most valuable truffle also in 2009, a sample of 750 grams, sold for 100,000 euros.

Not everyone knows that to invert the idea that the truffle has a unique élite target, people in charge of the event decided to give the most part of the money raised from the auction to charity: scholarships and charitable organisations and institutions at national and international level.Furthermore, it is worth pointing out that before November 13th, tha date of the the famous auction, the town of Alba is a flurry of appointments and initiatives, starting with the World Truffle Market event, where visitors can find many types of certified truffles. In fact, the truffles on sale are analysed and certified by a monitoring committee, which acts as a consumers’ desk, operating throughout the exhibition’s opening hours and to whom the purchasers can refer at any time.

As a setting of the event is the Food and Wine Exhibition called AlbaQualità: more than a hundred stalls where tourists can not only buy, but also simply enjoy all the typical flavours from the areas of Langa and Roero: from home made pastry to cheese and cured meats. However, the fine wines of this magnificent land will be the real protagonists of the event: Barolo, Barbaresco, Roero, Nebbiolo, Dolcetto, Barbera, Favorita, Arneis and Moscato, all fine wines that have made the Langhe area famous at international level.

An infinite number of products that make the lands that produce them even more special: one more reason to visit this fascinating area of Piedmont region.

The Insider’s Guide to Tasting Wines in the Piedmont: Wineries

The area around Alba in the Piedmont region of northern Italy is a delightful area to visit, especially if you’re into wines. The hills surrounding Alba are home to some of the Piedmont’s – and Italy’s – biggest flavored and most famous red wines and some of its best white wines.  This is where the legendary Barolo and Barbaresco and other noteworthy wines like Barbera, Dolcetto, Arneis and Nebbiolo are produced. Within a relatively short distance of one another lie some of Italy’s most famous wine towns such as Barolo, La Morra, Dogliani, Serralunga d’Alba and Barbaresco.

And to top it off, the wines are not only plentiful and good but are downright bargains compared with U.S. prices.

Although a very scenic and tourist-friendly destination, it is not on most American tourists’ radar screens. The area is replete with vineyards, crenellated castles, medieval towers and

unpretentious but scenic towns lying in repose on crests of gently rolling hills. It is also home to some of the Piedmont’s – and Italy’s – greatest restaurants where the local cuisines, while distinctly Italian, incorporate French culinary influences. The area around Alba is also renowned for its white truffles, chocolates, hazelnuts and artisanal cheeses.

Visiting Wineries
The vineyards are beautiful and visiting local wineries can be interesting and informative as well as a lot of fun. However, touring and sampling wines at local wineries is not the same as in the U.S. where wineries typically have posted hours and professionally staffed tasting rooms. Big wine estates are rare in the Piedmont. The vast majority are medium to small-scale producers that are typically family owned and operated enterprises and which are not staffed to handle casual, drop-in visitors.

Consequently, it’s appropriate to make reservations for a tasting and/or tour at most Piedmont wineries, usually with a minimum 2 -3 days advance notice. It would be risking disappointment to just drop in for a wine tasting and/or tour without an appointment, especially in the fall when wineries are extremely busy with the harvest and cellaring. Making an appointment also has the advantage that the winery may be able to arrange an English-speaking person to host the tasting and tour.

With appointment in hand, you will typically be hosted by someone active in and knowledgeable about the winery’s operations, oftentimes a member of the winemaker’s family. I have without exception found winery hosts in the Piedmont to be exceptionally hospitable and pleased to show you their winery’s products.

Wine tastings may be free or there may be a small fee for tasting wines. Regardless, it would be impolite to not purchase at least a few bottles of the estate’s wines. When I do so, I typically try to purchase wines that are not generally available in the U.S. on the assumption that this gives me bragging rights when I finally serve these wines to guests at home.

Thee are literally hundreds of wineries in the Piedmont.